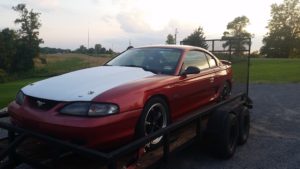 Last month we unveiled a new venture that goes hand in hand with our dyno service. We’ve purchased a “well-used” 1997 Ford Mustang GT for the purposes of showcasing a horsepower build up. We’ll be dynoing after each major change, which will give you an idea of what to expect should you want to do a similar modification. After we’re done we do plan on selling the car, so keep watch for that!

Our first build, as mentioned above, is a 1997 Ford Mustang GT Coupe. It comes with a SOHC 4.6L V8 engine with a stock horsepower rating of only 215. Ours is a US car with 155k miles on it, but still seems to have lots of life under the hood. It had sat for the last 6 months when we picked it up, but luckily it started and we were able to keep it going long enough to get it on the trailer. We stopped for gas on the way home and put some fresh 91 in it, and now it will stay running on it’s own.

Now for the fun! For a baseline reading, we did a quick scan of the car to make sure that it was worthy of a dyno run and made not of any modifications we could see on first glance. Without diving in too far, we noticed a cold air intake, Trick Flow upper plenum, and our large diameter tail pipes possibly indicate some exhaust work. On the dyno, we ended up with 178 horsepower and 195 ft/lb of torque. Considering a roughly 15% loss from flywheel to wheels, we’re fairly close to stock numbers. With the mods done, we should be getting more, so we’re expecting with a good tune up we should see those numbers increase nicely.

Our next dyno run will be after a full tune up as mentioned above. We plan on doing oil and filter, fuel filter, pcv valve, coil packs and spark plugs. We were going to do plug wires as well, but it looks like they’ve been changed recently. At this time we will also inspect and clean the air intake and make sure the throttle body is moving freely. If everything does well with those changes, we’ll move on to the following:

The PI swap, injectors and pulleys will most likely be changed all at once purely based on convenience. Keep watch on the Facebook page and blog for more updates!